What are Machine Learning Algorithms?

Algorithms are step-by-step computational procedures for solving a problem, similar to decision-making flowcharts, used for information processing, mathematical calculation, and other related operations.

Decision Tree is a type of Supervised Learning Algorithm (i.e. you explain what the input is and what the corresponding output is in the training data) that can be used for solving regression and classification problems by using tree representation. Decision trees can handle both categorical and continuous data. The tree can be explained by two entities, namely decision nodes and leaf nodes. The leaf nodes are the decisions or the final outcomes (categorical or continuous value) and each leaf node corresponds to a class label. The decision nodes or internal nodes are where the data is split (has two or more branches) and each internal nodes of the tree corresponds to an attribute. The topmost decision node in a tree which corresponds to the best predictor is call called the root node. 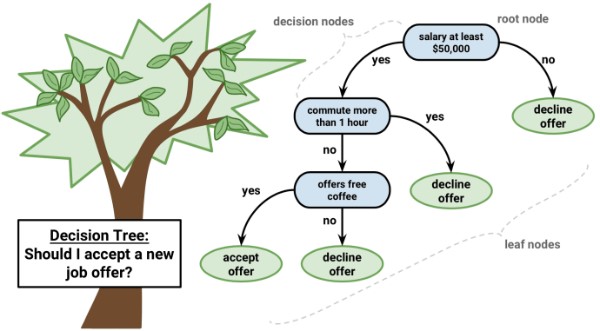 There are two main types of Decision Trees:

What we’ve seen above was an example of a classification tree, where the outcome was a variable like ‘accept offer’ or Decline offer. Here the decision variable is Categorical.

Here the decision or the outcome variable is Continuous and is considered a real number (i.e. a number like 1,2,3). Example of real numbers is price of a house or a patient's length of stay in a hospital

Use Case 01 - Analysis by making best efforts to process the analytics data to identify business queries and visualize data with AWS based BI tools.

How to build this??

There are many specific decision-tree algorithms to build a decision tree.

Here we only talk about a few which are,

ID3 (Iterative Dichotomiser 3) is one of the most common decision tree algorithm introduced in 1986 by Ross Quinlan. The ID3 algorithm builds decision trees using a top-down, greedy approach and it uses Entropy and Information Gain to construct a decision tree. Before discussing the ID3 algorithm, we’ll go through a few definitions.

Entropy, also called as Shannon Entropy is denoted by H(S) for a finite set S, is the measure of the amount of uncertainty or randomness in data.

Given a collection S containing positive and negative examples of some target concept, the entropy of S relative to this boolean classification is:

Here, p+ and p- are the proportion of positive and negative examples in S.

For a binary classification problem with only two classes, positive and negative class.

where,
IG(S, A) - information gain by applying feature A.
H(S) - Entropy of set S
T - The subset created from splitting S by attributing A such that

To get a clear understanding of calculating information gain & entropy, we will try to implement it on sample data. Consider a piece of data collected from a computer shop where the features are age, income, student, credit rating and the outcome variable is whether the customer buys a computer or not. Now, our job is to build a predictive model which takes in above 4 parameters and predicts whether the customer will buy a computer or not. We’ll build a decision tree to do that using ID3 algorithm. 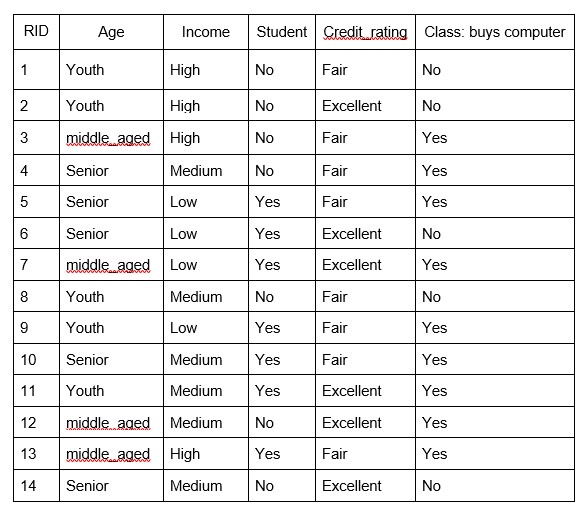 1. Create a root node for the tree
2. If all examples are positive, return leaf node ‘positive’
3. Else if all examples are negative, return leaf node ‘negative’
4. Calculate the entropy of current state H(S)
5. For each attribute, calculate the entropy with respect to the attribute ‘x’ denoted by H(S, x)
6. Select the attribute which has the maximum value of IG(S, x)
7. Remove the attribute that offers highest IG from the set of attributes
8. Repeat until we run out of all attributes, or the decision tree has all leaf nodes.


Step 1: The initial step is to calculate H(S), the Entropy of the current state. In the above example, we can see in total there are 5 No’s and 9 Yes’s.

Step 2 : The next step is to calculate H(S,x), the entropy with respect to the attribute ‘x’ for each attribute. In the above example, The expected information needed to classify a tuple in ‘S’ if the tuples are partitioned according to age is, 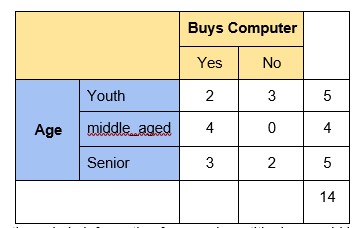 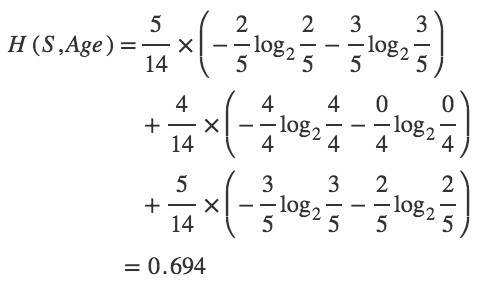 Hence, the gain in information from such partitioning would be, 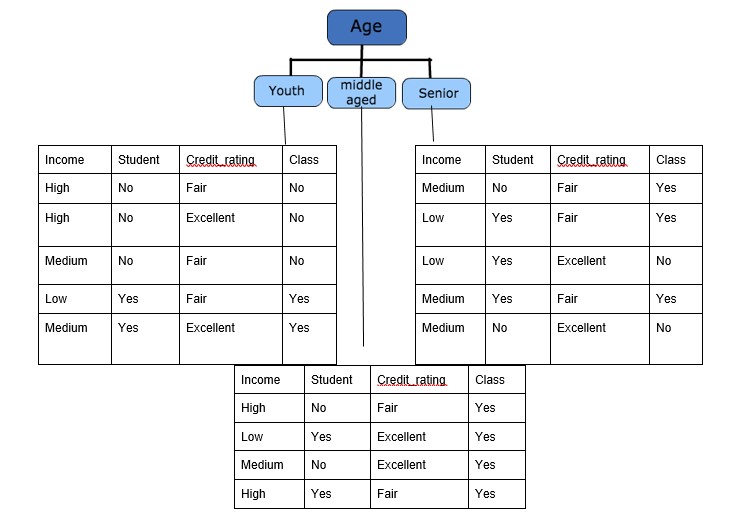 Step 4a: A branch with an entropy of 0 is a leaf node.

Step 4b : A branch with entropy more than 0 needs further splitting.

Step 5: The ID3 algorithm is run recursively on the non-leaf branches until all data is classified.

A decision tree can easily be transformed into a set of rules by mapping from the root node to the leaf nodes one by one. 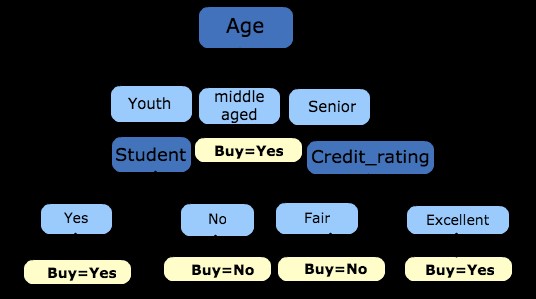 1. Decision Trees are easy to explain. It results in a set of rules.
2. It follows the same approach humans generally follow while making decisions.
3. Interpretation of a complex Decision Tree model can be simplified by its visualizations.
4. Decision trees can be used to predict both continuous and discrete values i.e. they work well for both regression and classification tasks.
5. They require relatively less effort for training the algorithm.
6. They can be used to classify non-linearly separable data.
7. Resistant to outliers, hence require little data preprocessing
8. They're very fast and efficient compared to KNN and other classification algorithms.

1. There is a high probability of overfitting in the Decision Tree.
2. Generally, it gives low prediction accuracy for a dataset as compared to other machine learning algorithms.
3. Information gain in a decision tree with categorical variables gives a biased response for attributes with greater no. of categories.
4. Calculations can become complex when there are many class labels.

The process of partitioning the data set into subsets. Splits are formed on a particular variable

How to Specify Test Condition?

Depends on the number of ways to split

Splitting Based on Nominal Attributes

Splitting Based on Continuous Attributes

◆ Static – discretize once at the beginning ◆ Dynamic – repeat on each new partition ◆ How to choose v?
Need to find optimal partitioning!

Can use GAIN or GINI !

The shortening of branches of the tree. Pruning is the process of reducing the size of the tree by turning some branch nodes into leaf nodes(opposite of Splitting), and removing the leaf nodes under the original branch. Pruning is useful because classification trees may fit the training data well, but may do a poor job of classifying new values. A simpler tree often avoids overfitting. 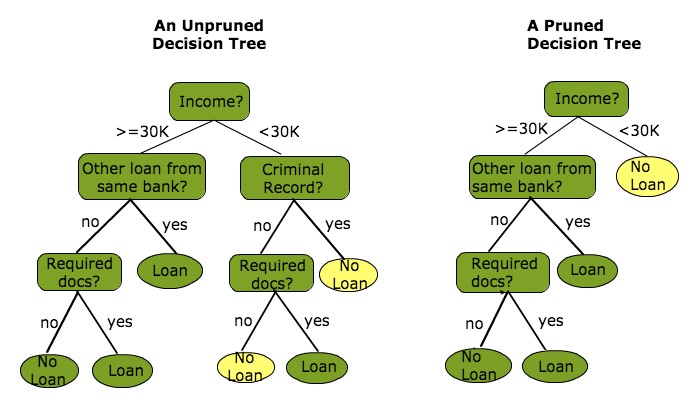 Overfitting is a practical problem while building a decision tree model. The model has an issue of overfitting when the algorithm continues to go deeper and deeper in to reduce the training set error, but results with an increased test set error i.e, reduces the accuracy of the prediction for our model. It generally happens when it builds many branches due to outliers and irregularities in data. Two approaches which we can use to avoid overfitting are:

In pre-pruning, it stops the tree construction early. It is preferred not to split a node if its goodness measure is below a threshold value. But it’s difficult to choose an appropriate stopping point.

In post-pruning, first it goes deeper and deeper in the tree to build a complete tree. If the tree shows the overfitting problem then pruning is done as a post-pruning step. We use cross-validation data to check the effect of our pruning. Using cross-validation data, it tests whether expanding a node will make an improvement or not. If it shows improvement, then we can continue by expanding that node. But if it shows a reduction in accuracy then it should not be expanded i.e, the node should be converted to a leaf node.

Classification and Regression Trees or CART for short is a term introduced by Leo Breiman to refer to Decision Tree algorithms that can be used for classification and regression predictive modelling problems for numeric attributes (regression) or categorical attributes (classification). Decision tree models where the target variable can take a discrete set of values are called Classification Trees and decision trees where the target variable can take continuous values are known as Regression Trees. The representation for the CART model is a binary tree. In CART we use Gini index as a metric. 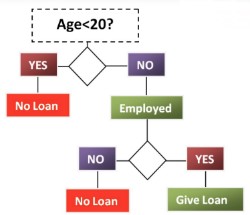 Steps to Calculate Gini for a split

1.Calculate Gini for sub-nodes, using formula sum of square of probability for success and failure (p^2+q^2).

Calculate Gini for split using weighted Gini score of each node of that split.

1. Start with the root node (all data in dataset)
2. Split the node with minimum Gini Index Recursive process
3. Assign nodes with predicted classes
4. Missing data: program uses best available info to replace missing data (based on a variable that is relative to the outcome variable)
5. Stop tree building: when every aspect of the dataset is visible in decision tree
6. Tree Pruning: based on miscalculation rate
7. Optimal Selection: best tree that fit dataset with a low percentage of error


To get a clear understanding of calculating Gini index, we will try to implement it on the previous data set used in above ID3 algorithm. 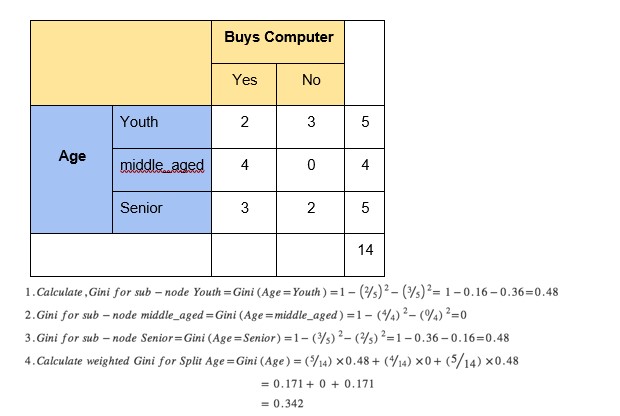 Repeat until we run out of all attributes, or the decision tree has all leaf nodes.