If applications are hosted in AWS, creating a site-to-site VPN can provide access to these kind of networks. In this post, we explain the steps to create a site-to-site VPN tunnel connection between an AWS VPC and a third-party CISCO ASA router

There are a couple ways of achieving this:

Of the two options, this blog explores how a VPN tunnel can be created using Openswan.

Setting up a VPN Tunnel on an AWS platform using Openswan

This can be explained using the following use case.

Let us assume we have a Java application deployed on multiple AWS EC2 instances inside a private subnet. There is a need to retrieve data from an external third-party API and this API is not accessible as a public API. Thus, a site-to-site VPN tunnel needs be created between the Java application instance(s) and the third-party external API.

There are four main steps in creating a VPN tunnel using Openswan; 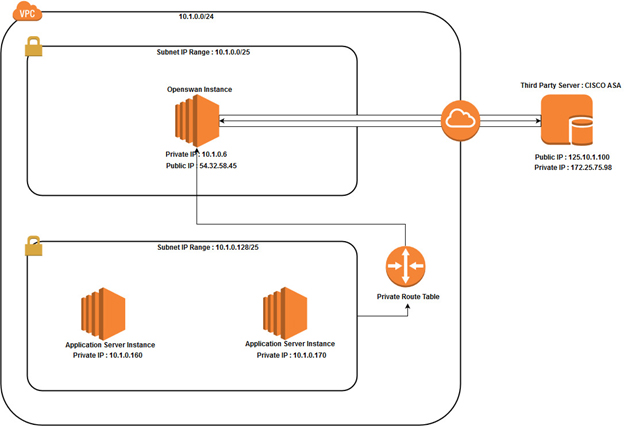 The following prerequisites should be met to execute the first step

You are now ready to proceed with VPN tunnel creation.

Go to the Route Tables from the side bar and select your route table of the private subnet. Go to Routes tab and add inbound rule. Edit routes and add another route.

All the traffic received from the third-party IP address as the destination will route to the Openswan instance. Go to the Route Tables from the side bar and select your route table of public subnet. Next, Go to Routes tab and add inbound rule. Edit routes and add another route.

This will direct traffic between the Openswan instance and the Third-party network. Now you have a public EC2 instance to install Openswan and all the traffic routes are configured as needed.

Step 02: Install Openswan inside the EC2 instance and configure the tunnel

Before proceeding with the next step, carry out configurations on the CISCO end. Contact the system admin of the third-party network and complete the following task with him/her.

Next, create the following file.

Now all configurations are complete.

Note: You can call third party network using DNS or private IP address. If you are using DNS, you have to add a record to the /etc/hosts file as follows to resolve the DNS.

If you are connected through telnet, you have successfully created the site-to-site VPN between the AWS platform and the third-party CISCO ASA network.