Amazon Redshift is a fast, fully managed, petabyte-scaled data warehouse solution that uses columnar storage to minimize Input/Output (I/O), provide high data compression rates, and offer fast performance. As a typical Data Warehouse, it is primarily designed for Online Analytic Processing (OLAP) and Business Intelligence (BI) and not designed to be used as an Online Transaction Processing (OLTP) tool. It supports ANSI-SQL and is a massively parallel processing database.

Users can create one or more clusters with each cluster having multiple databases. Most of the time there is one Redshift cluster and additional clusters can be added for resilience purposes. Any cluster can have two types of nodes, namely a leader node and compute nodes.

Redshift can decide automatically how the data distributes between slices. Also a user can specify one column as the distribution key. When a query is executed, the query optimizer on the leader node redistributes the data on the compute nodes as needed in order to perform any joins and aggregations. 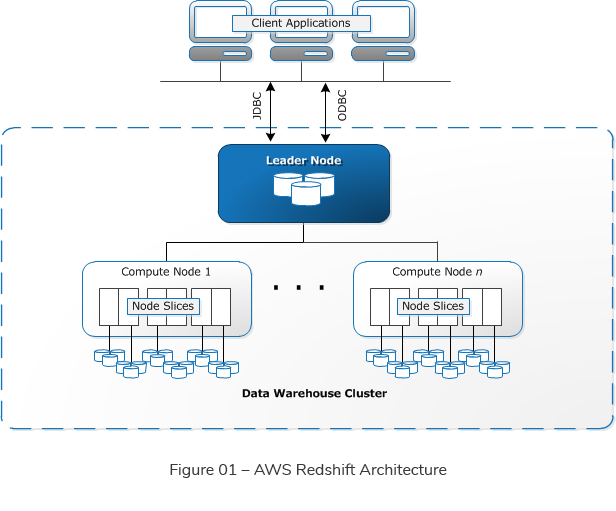 With time, as you load more and more data and apply DML commands, the performance can deteriorate. A US client from the healthcare sector wanted to apply best practices on to their Redshift cluster in order to speed up and improve its performance.

The given Redshift cluster was analyzed based on the following key indicators.

Benefits to the client