Amazon Aurora, part of the Amazon RDS family, is a fully managed MySQL and PostgreSQL compatible, relational database engine that combines high-end commercial databases with the simplicity and cost-effectiveness of open source databases.

In a typical RDS (MySQL, PostgreSQL, etc.), you usually find the following Multi-AZ deployment where the primary, standby and read replicas are in different instances and the storage lies within the EBS volumes of the EC2 instance, which RDS is made of. 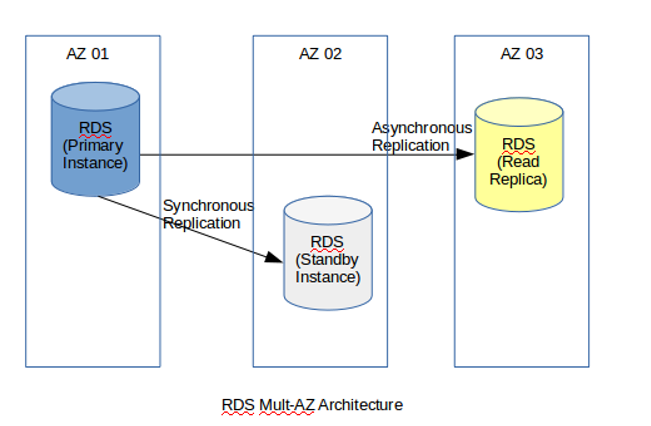 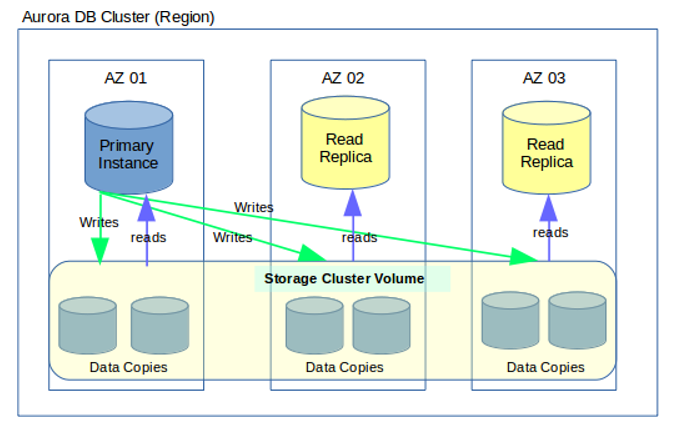 In a typical Aurora cluster, there should be a minimum of three Availability Zones within the cluster (Note: Aurora only supports regions with a minimum of three Availability Zones). The storage and the compute (EC2) are separated / independent in the Aurora cluster (See the cluster volume in the diagram where the storage exists).

Since the Aurora compute instances (EC2) and the Aurora storage cluster is independent, it is quite easy to scale the storage (can scale up to 64 Tebibyte) rather than scaling within EC2 instances in a traditional RDS Multi-AZ architecture.

Aurora maintains HA by having Aurora Read Replicas in the other Availability Zones. Aurora automatically fails over to an Aurora replica in case the primary DB instance becomes unavailable.

Up to fifteen read replicas can be replicated across multiple Availability Zones. Since the storage cluster is represented as a single, logical volume, Aurora replicas can return the same data as query results with a minimum replica lag. This is quite different to RDS - the data is replicated to RDS Read Replicas in an asynchronous manner - where there is no need to replicate any data because the data is shared among all the instances (primary and read replicas) in the storage cluster

5.Migration from other Database Engines

5.1.From RDS (MySQL/PostgreSQL) to Aurora

The data can be migrated from Amazon RDS for MySQL and Amazon RDS for PostgreSQL into Aurora. (Currently, the migration is limited to these two database engines only).

The migration can be done in two ways;

1.By creating RDS snapshots from RDS MySQL/ PostgreSQL databases and restoring them to Aurora (This is directly facilitated from the AWS Management RDS console)

2.From a standalone MySQL 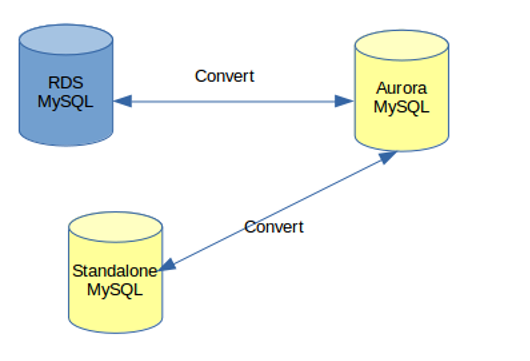 2.1.From other Database Engines

If you wish to migrate databases from databases other than MySQL or PostgreSQL, you can use AWS DMS. 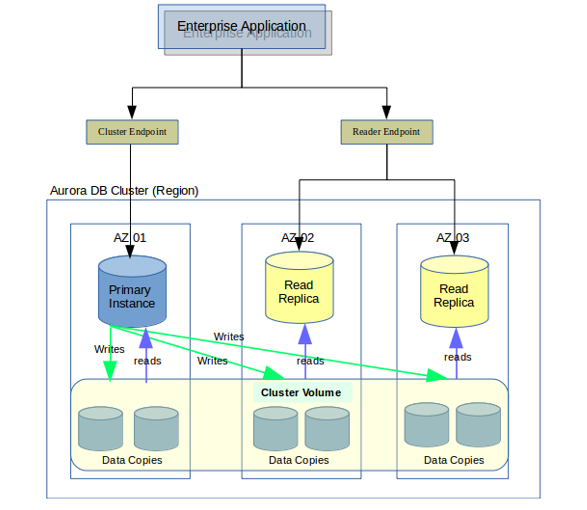 This connects to the current primary DB instance in the DB cluster. This is the only endpoint that can perform write operations. This is the first to be created while setting up the cluster with a single DB instance.

AWS Aurora security is managed at many levels.

• Using IAM controls access to the Aurora DB cluster
• At the VPC level, the Aurora cluster should be created within a VPC
• Encryption is handled in-transit and at rest. When creating the cluster, there is a check box to be selected to activate the cluster encryption. However, you cannot encrypt an already created cluster. But you can restore an unencrypted cluster snapshot as an encrypted one. Once you encrypt the cluster, you cannot decrypt it. 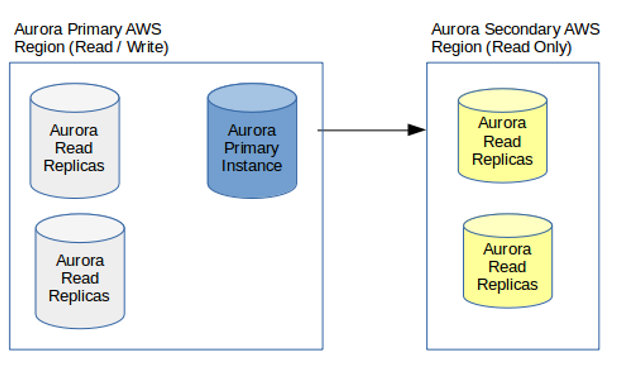 The Aurora Global Database consists of;

• One primary region — performs both read and write functions
• One secondary region — this is where the read-only replicas reside. It can be scaled out to have more replicas within the region itself

The Global Databases are useful when any application has a worldwide access. Then the secondary region can be located based on the demand it has worldwide. It can be useful in a regional fail-over as well. If for some reason, a cluster goes down, the replica can be promoted to be the primary one and can be provided with read - write capability under one minute.

The data replication happens between regions with very low latency (even under a second). A dedicated infrastructure is being used to do this task.

This is different to Backtrack and does not use any global databases. This is a Aurora MySQL database replication from one region to another. You can have up to five cross-region DB clusters that are read replicas.

Aurora takes a snapshot of the source cluster and transfers the snapshot to the read replica region. This takes more time for cross region read replica created compared to Global Databases, but these regional read replicas can always be promoted to a standalone cluster at any point.

1.Simple — Removes the complexity of managing database instances and capacity. The database will automatically start up, shut down, and scale to match your application’s needs. It is a simple, cost effective option for infrequent, intermittent or unpredictable workloads.
2.Scalable — Seamlessly scale compute and memory capacity as needed with no disruption to client connections.
3.Cost Effective — Pay on a per-second basis only for the database resources you consume. You don’t pay for the database instance unless it’s actually running.
4.Highly Available — Built on distributed, fault-tolerant, self-healing Aurora storage with 6-way replication to protect against data loss.