An effective security strategy begins with stringent access control and the least privilege necessary for persons or systems accessing data [4]. Therefore, AWS requires that you manage your own access control policies and provide in-depth support in order to achieve the best possible data protection available.

“Encryption” is a critical component of a defence-in-depth strategy, which is a security approach with a series of defensive mechanisms designed. It can also further mitigate weaknesses in primary access control mechanisms.

There are multiple cryptography services offered by AWS.

Theoretically, all of the above services are working as Hardware Security Modules (HSMs). Out of these, Cloud HSM gives you the most control and you’re basically responsible for managing it. All the other services are basically managed by AWS.

However, out of these services, I am only going to discuss the key features and trends relating to AWS KMS in this blog post. Most of the content is an extract of AWS documentation and AWS re:Invent conference videos. I’m hoping this blog post will help you have a more concise picture of key points related to this topic.

By default, CMK can encrypt data up to 4KB.

If the data to be encrypted is more than 4KB, you will have to use (CMK + Data Encryption Key) combination, which is known as the KMS Two Tier Architecture.

CMK is a logical representation of a key. These keys can be generated by KMS or by being imported. CMKs are always protected by AWS KMS infrastructure and always resides within KMS HSM housing. Any external party communication takes place via API.

CMKs can encrypt or decrypt data up to 4KB in size. They are being created, managed and deleted entirely within KMS. They never leave the KMS region or KMS infrastructure unencrypted.

There are three types of CMK.

As explained, until recently KMS encryption and decryption was supported through symmetric encryption (see Figure 3(a)). 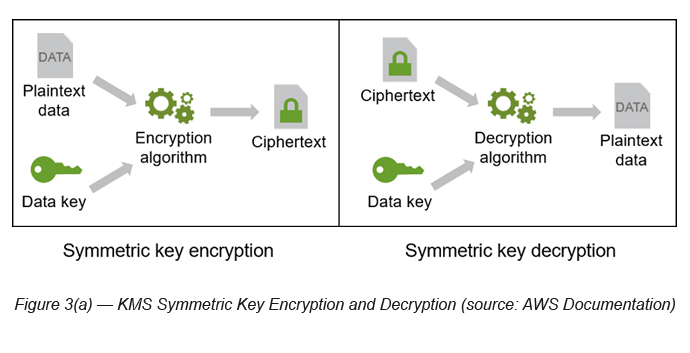 The Symmetric Encryption process can be explained in several steps (see Figure 3 (b)). 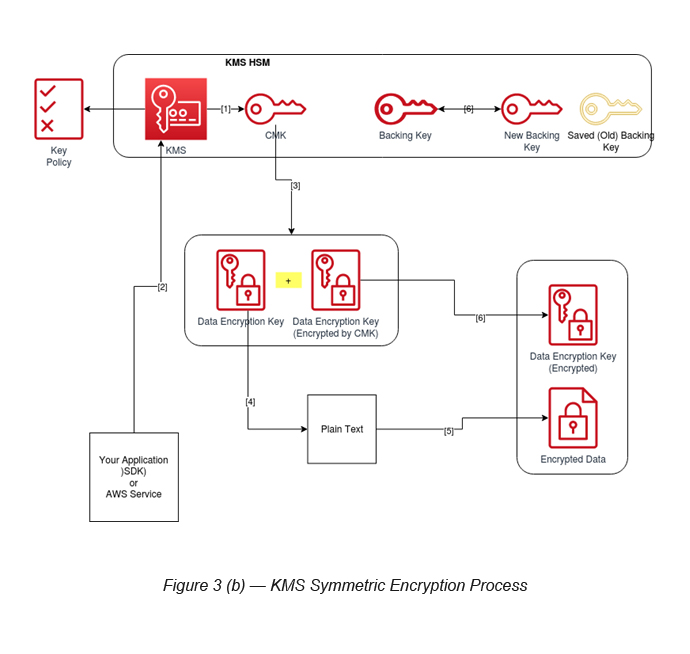 This diagram explains how a plain text gets encrypted and how this key, which is used to encrypt the plain text, is again encrypted by KMS and stored along with the encrypted data.

Step 1: Create a Customer Managed Key (CMK) either by using the AWS console or via AWS CLI.

Step 2: Your application (which is running KMS SDK), or any other AWS service, requests for a Data Key (via an API call) in order to encrypt a plain text.

Step 3: KMS returns both the Data Key and the encrypted Data Key (encrypted by CMK).

Step 4 and 5: Your application or the AWS service will consume the Data Key in order to encrypt the plain text and generate the cipher text (encrypted data).

Step 6: The returned encrypted data key will be stored alongside the encrypted cipher text.

In order to keep all the keys safe, CMK should also be encrypted as the last key of the envelope encryption chain. However, AWS ensures that it is kept as is by confirming its security within its infrastructure.

P.Note: After this process, the Data Encryption Key (unencrypted) will be deleted. When you want to decrypt the data, we can request a Data Key from KMS. This is all done to enhance security in the system.

All CMKs have a Key Policy, and you must use it to control access to a CMK. IAM Policies are not sufficient to allow access to CMK, although you can use them in combination with a CMK Key Policy.

For example, even with Amazon S3 Full Access (an IAM Policy) for a given IAM user or an IAM role, this full access permission will be limited by the permission criteria defined within the CMK Key Policy.

By default, unless you specify IAM user or role restrictions, it enables the root user in the account to add IAM polices that reference the key (see Figure 4). However, it is highly recommended that you change the default CMK policy to align with your organization’s best practices for least privilege.

Cryptographic best practices discourage extensive reuse of encryption keys. When you enable automatic key rotation for a customer managed CMK, AWS KMS generates new cryptographic material for the CMK every year. AWS KMS also saves the CMK’s older cryptographic material in perpetuity so it can be used to decrypt data that it encrypted. AWS KMS does not delete any rotated key material until you delete the CMK.

The key rotation changes only the CMK’s backing key, which is the cryptographic material that is used in encryption operations (see Figure 5). Old backing keys are still kept within KMS for any decryption in the future.

The CMK is the same logical resource, regardless of whether or how many times its backing key changes. The properties of the CMK do not change, as shown in the following image.

Automatic key rotation is not supported for imported keys, asymmetric keys, or keys generated in an AWS CloudHSM cluster using the AWS KMS custom key store feature. If you choose to import keys to AWS KMS or asymmetric keys or use a custom key store, you can manually rotate them by creating a new CMK and mapping an existing key alias from the old CMK to the new CMK.

If you manually rotate your imported or custom key store keys, you may have to re-encrypt your data depending on whether you decide to keep old versions of keys available.

Some of the key features are: 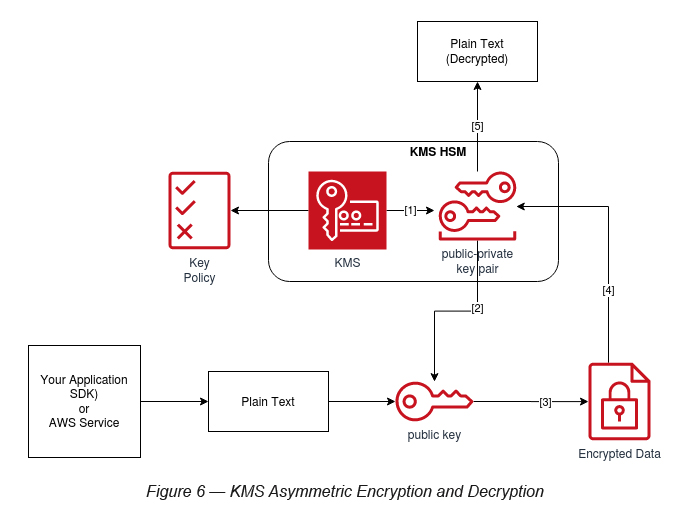 Step 1: Request (via an API call) KMS to create a key pair (public and private).

Step 2: After creating the key pair, as the user, you can download the public key of the key pair and use it outside of KMS.

Step 3: You or a third party can use this public key for message encryption.

Step 4: This encrypted message can be sent to KMS (via an API call) if you require to decrypt the message.

Step 5: KMS decrypts the message with the help of the private key of the key pair.

What is Cloud HSM?

The Hardware Security Module (HSM) is a dedicated hardware security module under your exclusive control. That means you get dedicated access to HSM appliances. It is important to note that, only you have access to your keys and operations on the keys. HSMs are located in AWS data centers and are managed and monitored by AWS. They are FIPS 140–2 Level 3 compliant and are handled inside your VPC, in isolation from the rest of the network. We will discuss more about CloudHSM capabilities in another blog post.

Until then happy encrypting with AWS!